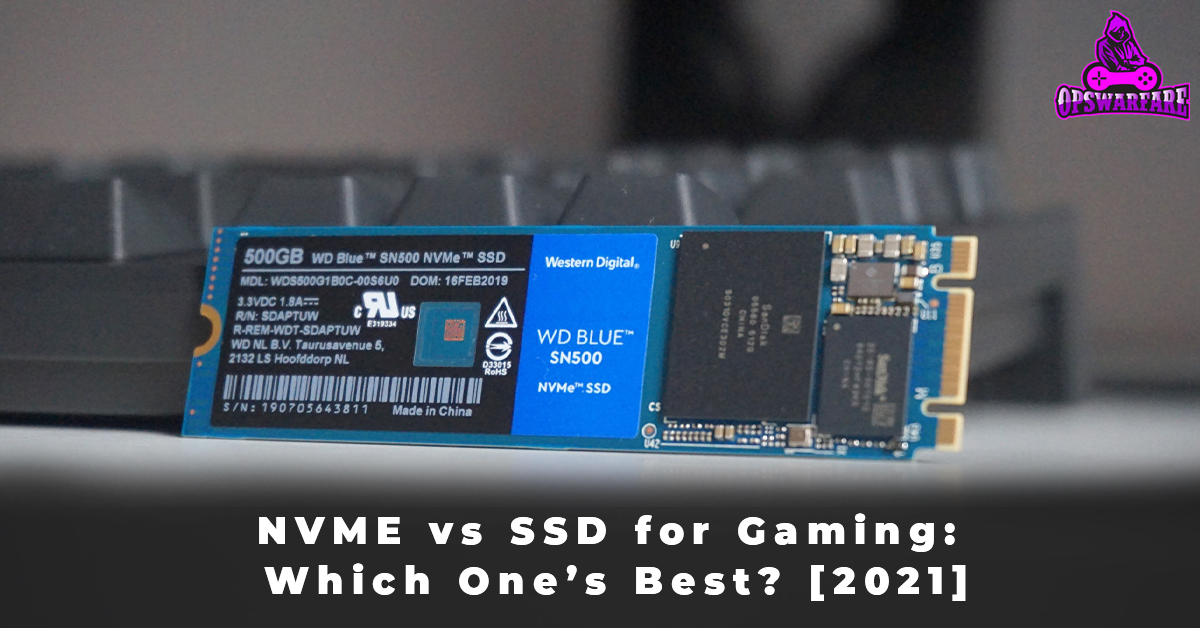 One of the biggest turn off for a gamer is a slow and unresponsive system that cannot do justice to the game. As a result, the game ends up taking hours to load and runs so slowly that it completely ruins the entire gaming experience.

Therefore, one of the major things that gamers are concerned about is to boost the performance of their gaming PCs so that they can enjoy the gaming process to the fullest. One of the things that is often brought up in discussions is whether one should opt for an NVME or an SSD to optimize the gaming experience to the fullest.

The aim of this article is to elaborate on what an NVME and an SSD are and whether an SSD or NVME would be the better choice for your gaming PC. Both SSD and NVME have their own set of pros and cons. The target of both of them is to amplify and boost the performance of the system. While an NVME is targeted for systems and desktops, an SSD will get the same thing done for a laptop. But before reaching a conclusion of which one would be the best choice for you, it is best to go over the features of both and get a comprehensive idea of what they truly have to offer for the users.

What is an NVME?

NVME is a non-uniform memory access scalable storage protocol. NVME is basically a protocol for the flash memory transfer with the SSD. The main goal of the NVME is to reduce the response time of applications and games and thus reduce the lag time and enhance the speed of the system. The NVME protocol runs thousands of commands in a parallel queue which makes it a lot faster than the traditional memory storage options. The main difference between an NVME and traditional hardware is that the traditional hardware relies on a single command queue whereas the NVME makes use of parallel command queues. This surely makes data parsing and manipulation so that the games can run smoothly and without any interruption.

The NVME memory is installed in the PCI express port. This port was originally meant for graphics cards so it is an obvious fact that the installation of an NVME boosts the performance of the computer and enhances the speed by a significant factor. Therefore, the use of an NVME is highly recommended for people who are into gaming and are looking for a way to boost and amplify the performance of their computers.

Despite the performance boost, there are some other factors about the NVME that one has to bear in mind. The performance and speed boost is surely an attractive feature, but at the same time, you have to bear in mind that NVME is only available for desktop computers so you will not be able to use it if you own a laptop. Moreover, NVME is one of the pricier and expensive storage options. And if you truly want to make use of all the strength and power of an NVME, it is recommended that the operating system of the computer is installed on the NVME. And unfortunately, most of the operating system BIOS are not compatible with NVME so that might be an issue for some people,

What is an SSD?

SSD stands for Solid State Drive. It is a new generation of data storage devices that is used in computers. SSD makes use of flash based memory and thus reduces the fetching time for files and data. Making use of the NAND flash memory, the SSD has an instant access time so you can be a hundred percent certain that the game will load entirely in one go and you will not be stuck with the game buffering and not loading properly. The storage space of the SSD is also quite efficient so you will be able to store a decent number of games and other data on the storage without having to invest in any external storage source.

Since the SSD memory does not have any moving parts the data is stored in a non-volatile flash memory. This also means that the data reading is not dependant on the movement of any needle. This factor significantly reduces the memory’s performance and allows the data to be fetched at a rapid and faster rate. The exact speed and performance of the SSD cannot be determined as it is because it varies from one manufacturer to another and also on the system specifications.

Just like NVMEs, the SSD storage also has its own set of pros but also comes with a couple of cons. The biggest downside of an SSD is the fact that it is not available in a lot of sizes. Other than the size limitation, one also has to bear in mind that they come at a larger price. Therefore, if you wish to get a decent SSD, you will have to spend a couple of bucks. However, unlike NVMEs, an SSD can easily be installed on a laptop as well so you will be able to get an SSD if you are someone who likes to enjoy gaming on your laptop.

NVME Vs SSD: What Should You Opt For?

As already discussed, both NVME as well as SSD have their own perks and downsides. Both have the same purpose tho i.e. to boost the performance of the computer and optimize it for gaming so that the games load at a faster rate and the users can have an optimized gaming experience.

If you are someone who makes use of a laptop and is looking for a way to boost the storage option and wishes to invest in a better option, going for an SSD would be the right choice for you. An SSD, despite the smaller memory size, is smaller in physical size as well. Therefore, you will be able to install it on your laptop quite easily. This is not the case with NVMEs. Despite the performance boost, they are not compatible to be used with laptops so they are left for the people who wish to upgrade their PCs and boost their performance and speed.

Both NVMEs as well as SSDs are expensive and will likely cost you a huge sum of money. But at the end of the day, the performance boost element surely makes them worth every penny that is spent on them.

To simplify, it is hard to truly state whether you should be investing in an NVME or an SSD. Both have the same goal but the cost and other specifications vary for both of them. Therefore, at the end, it all comes down to the user requirements. It is best for you to truly understand what an NVME is and what is an SSD. Then you can compare the specifications and features of both to your requirements and determine which one would prove to be the better option given your needs.