Comparison Between: Wireless Vs Bluetooth Keyboard - [2021] Skip to content 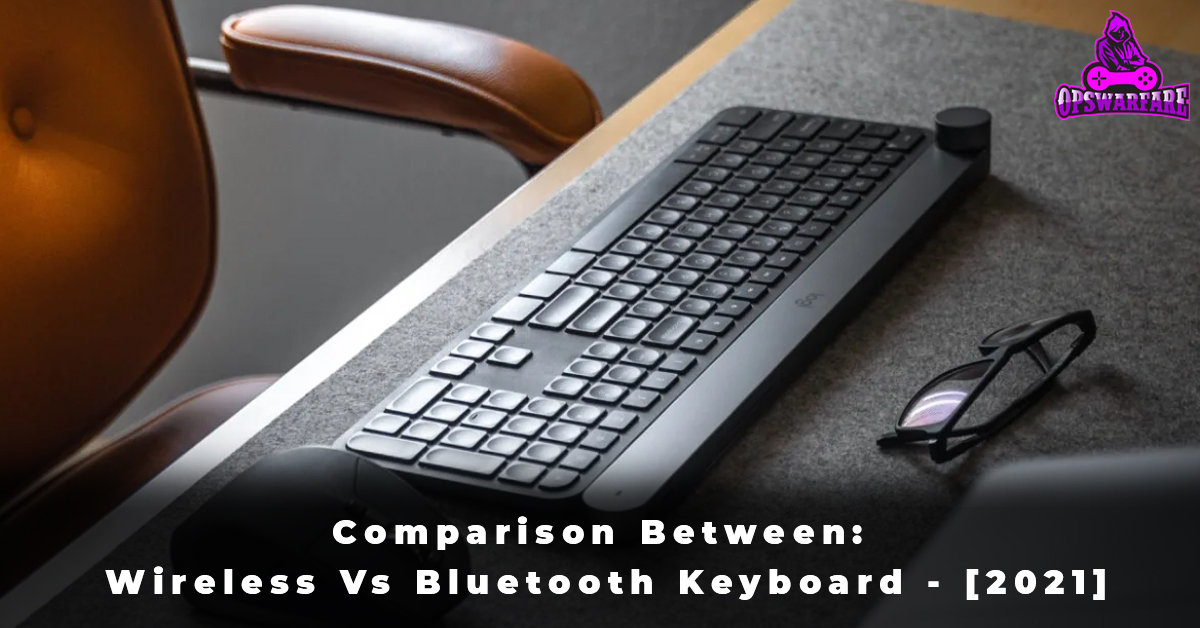 The first sets of computer accessories such as keyboards and mice came with their long wires and cables; however, this has recently changed with the advent of the wireless keyboard and mouse. Wireless devices are becoming increasingly popular for a number of reasons, the main one being that you now have more freedom by eliminating the need for pesky wires and cables.

Wireless accessories are all the heat nowadays in the world of gaming with users following the trends set by famous streamers who have all moved from the wired peripherals to their wireless alternatives; taking for example Shroud has recently gone all Wireless and it has heavily impacted the world of gaming.

When it comes to the context of keyboards, most gamers will be stuck on the idea of whether to go with a Bluetooth keyboard or a wireless keyboard. That is what we will be looking at in this article, the argument of wireless keyboards Vs Bluetooth.

A wireless keyboard is a computer keyboard that allows the user to communicate with computers, tablets, or laptops with the help of radiofrequency (RF), such as WiFi and Bluetooth, or with infrared (IR) technology. It is common for wireless keyboards available these days to be accompanied by a wireless mouse.

The pairing of a Wireless keyboard will depend mainly on the presence of a wi-fi network and the strength of the signals being generated. Overall, a lot more devices can connect with wi-fi networks as compared with Bluetooth networks.

This has to do with the ability of the device to connect to and work effectively with other devices. Overall, wireless receivers are designed as a proprietary device with a particular brand name.

As expected, the compatibility of a Wireless keyboard is dependent on its ability to be able to connect with the prevailing Wireless network. As long as this is done, compatibility is not an issue.

In general, a Bluetooth keyboard and mouse can only be paired with other devices that are designed to be compatible with each other.

The great thing about Bluetooth keyboards and mice is that they can connect to any device that has Bluetooth enabled, regardless of the brand that made it or even how the pairing was done. This generally makes the Bluetooth keyboard and mouse more compatible.

When it comes to the use of a mouse or keyboard, one of the most important factors of consideration is latency. This is because you do not want any delay of any kind when you are working. This is particularly important when quick response is needed in engagements like games.

The latency is lower with the Wireless keyboard. The recorded latency rate can be at an impressive 1 ms.

Based on their level of advancement which is generally lower than the Wireless counterparts, the latency rate is typically higher and comes at about 1.3 most.

This is a reference to the distance over which the signals will remain functional.

As mentioned in the previous section, the wireless keyboard typically has a much greater range. The range can be up to 32 meters indoors and then 95 meters outdoors. An environment with a larger surface area, a wireless keyboard, and a mouse may be better options.

As with other Bluetooth devices, the range for the keyboard can be as low as five meters or it can be as much as 30 meters. But it must be stated that even at that, it is still noticeably slower than the range of the wireless keyboard and mouse.

Overall, Wireless keyboards have higher rates of connectivity and speed than their Bluetooth counterparts because of the way that they have been configured. They are also well-suited for work in environments with higher demands.

The interesting thing is that both Bluetooth and other kinds of wireless technologies work via radiofrequency. The operation of Bluetooth is done particularly in the 2.4 to 2.8 GHz range. However, others who are operators can also have a much wider span.

In this article, the differences between Bluetooth and wireless keyboards have been clearly outlined. Based on this, it will become a lot easier for the user to select the kind of computer accessories that will be best for the kind of purpose that is intended for the mouse or keyboard.

By knowing the main features of each product, one will be in a better position to make a judgment regarding which one to go for. Wireless products have made life a lot easier for everyone but there are still different features with the specific wireless products and that is the essence of this piece.

Is a Bluetooth keyboard better than wireless?
Bluetooth is more compatible with more devices because you can use its peripherals with devices that don’t have USB-A ports. As USB-C continues to grow, owning a wireless RF mouse or keyboard will become more complicated. If you want to use a mouse on a tablet, a Bluetooth model will likely work best.
How do you charge a Bluetooth keyboard?
Use the included charging cable, and insert the USB B connector (smaller connector) to your Bluetooth Keyboard into the small USB port. 2. Plug the USB A connector (larger connector) into a power adapter or your computer.
Can a Bluetooth keyboard be hacked?
Due to weak encryption between the device and the USB dongle, it is possible for a hacker to crack into the communication link between a keyboard and computer during the Bluetooth pairing process.
Is wireless keyboard bad for health?
All electronics emit EMF radiation while they’re in operation, including wired mice and keyboards. The amount added by wireless ones is negligible. It dissipates quickly and isn’t known to be harmful to the environment or to us. While it’s being generated, it could interfere with the function of other devices nearby.
Do wireless keyboards need Bluetooth?
Not all wireless is Bluetooth; in fact, most wireless keyboards and mice don’t use Bluetooth at all. There are many other wireless protocols that they can use: TI makes the CC24 series of chips, Nordic Semiconductor makes the nRF24 series, and so on.